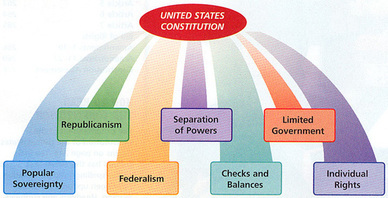 The Framers of the Constitution constructed a new system of government.  Seven principles supported their efforts. To picture how these principles work, imagine seven building blocks. Together they form the foundation of the United States Constitution. ​ 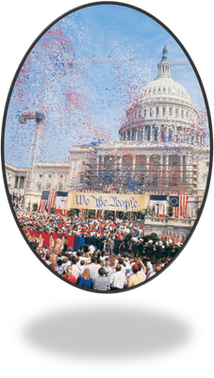 The American form of government emphasizes freedom, democracy, and the importance of the individual. The Constitution rests on the idea of popular sovereignty--a government in which the people rule. As the nation changed and grew, popular sovereignty took on new meaning. A broader range of Americans shared in the power to govern themselves. 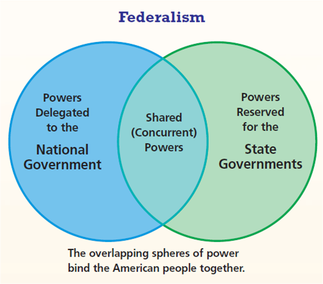 Federalism
How Is Power Shared?
The Framers wanted the states and the nation to become partners in governing.To build cooperation, the Framers turned to federalism. Federalism is a system of government in which power is divided between a central government and smaller political units, such as states.

In the early years of the United States, federalism was closely related to dual sovereignty, the idea that the powers of the federal government and the states were clearly defined, and each had exclusive power over their own spheres with little overlap. This view of federalism led to states’ rights conflicts, which were contributing factors in the Civil War. The Framers used federalism to structure the Constitution. The Constitution assigns certain powers to the national government. These are delegated powers. Powers kept by the states are reserved powers. An example of this would be that the national government set the minimum voting age for every state, and the states set the minimum driving age in their own state. 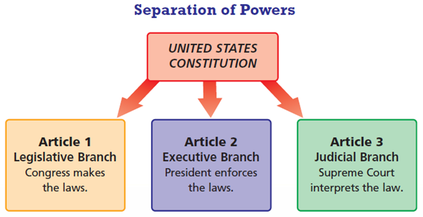 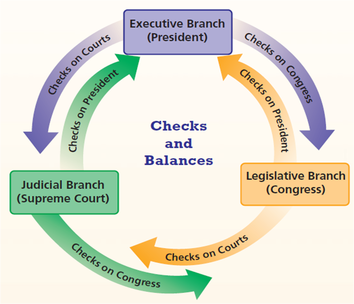 The Framers included a system of checks and balances in the Constitution to help make sure that the branches work together fairly. For example, only Congress can pass laws. Yet the president can check this power by refusing to sign a law into action. In turn, the Supreme Court can declare that a law, passed by Congress and signed by the president, violates the Constitution. 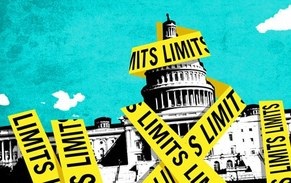 Limited Government
How Is Abuse of Power Prevented?
The Framers restricted the power of government.  This is known as the principle of Limited Government.  Article 1, Section 9, of the Constitution lists the powers denied to the Congress. Article 1, Section 10, forbids the states to take certain actions.  The principle of limited government is also closely related to the “rule of law”: In the American government everyone, citizens and powerful leaders alike, must obey the law. Individuals or groups cannot twist or bypass the law to serve their own interests. 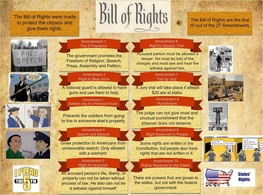 Click to enlarge.
Individual Rights
How Are Personal Freedoms Protected?
The first ten amendments to the Constitution shield people from an overly powerful government. These amendments are called the Bill of Rights. The Bill of Rights guarantees certain individual rights, or personal liberties and privileges. For example, government cannot control what people write or say. People also have the right to meet peacefully and to ask the government to correct a problem. Later amendments to the Constitution also advanced the cause of individual rights.
Note Questions:
Complete the following for each of the Seven Principles.

1.  Describe what each principle means.

2.  Give an example of how each principle works.

Summary:
EQ: Why are the Seven Principles of the U.S. Constitution an effective way to guard against tyranny?