The Articles of Confederation

​Essential Question:  Why was the first constitution of the United States (The Articles of Confederation) abandoned? 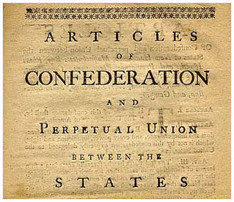 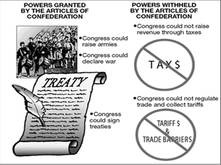 Strengths & Weaknesses of the Articles
The Articles of Confederation represented the first constitutional agreement between the American states and emphasized a confederation (league of independent states) system of government.  Because of the tyranny they had experienced under British rule, the Founding Fathers designed a confederation of powerful states united by a weak national government where each state was given one vote in a unicameral (one-house) legislature.

This government was limited in many ways and therefore was rather weak.  It did not have the power to raise taxes or regulate trade. When the national government needed money, the Confederation Congress had to ask the states to contribute funds, as the states had the right to tax its citizens; a state could refuse to contribute. During the Revolution, America borrowed millions of dollars from foreign nations and individuals. Without the power to tax, the Confederation Congress could not pay off its frustrated lenders.

The Confederation Congress had other weaknesses. There was no president to lead the country and enforce laws passed by the Congress. There was no court system to settle disputes between the states. Laws were difficult to pass because nine out of the thirteen states (almost 70%) had to approve a law before it could go into effect. Amending the Articles of Confederation was considerably more difficult; all thirteen states had to agree.  While these limitations may be viewed as bad, it must be remembered that the designers had purposely limited the power of the National Congress in an attempt to protect and preserve the individual powers of the states and guard against tyranny. 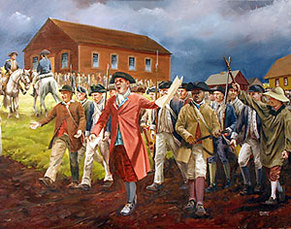 Results of the Weak National GovernmentThe weaknesses of the Articles of Confederation led to foreign countries taking advantage of the new nation. Great Britain refused to remove its troops from the Ohio River Valley. Spain closed the Port of New Orleans to American farmers who depended on the Mississippi River and the Port of New Orleans to ship their goods east. The Confederation Congress was too weak to handle the nations that were bullying America.

Several other challenges occurred to further point out the lack of power in the central government.  After the Revolution there was an economic depression. Business activity slowed, prices and wages fell, and unemployment rates rose.  The depression was especially hard on farmers.  During the Revolution farmers were eager to meet the demand for more farm products.  To do so, they borrowed money for land, seed, animals, and tools.  When prices fell, many farmers could not repay their loans.

In Massachusetts, matters were made even worse when the state raised farmers’ taxes.  The courts seized the farms of people who could not pay their loans.  Farmers protested these actions, and in 1786, a rebellion broke out in Massachusetts.  Daniel Shays, a veteran of the Revolution, was determined to save his farm.  He gathered a force of nearly 2,000 farmers.  They traveled the countryside attacking courthouses and preventing the sale of property as payment for debts.  When they tried to attack a warehouse full of rifles and gunpowder it was up to the Massachusetts legislature to send the state militia to drive them off.  Shays’ Rebellion was over, thus narrowly averting an escalating crisis.

Shays’ Rebellion led the nation’s leaders to believe that the Articles of Confederation were too weak and if the country was to survive, a stronger national government was needed. In the summer of 1787, 55 state delegates met in Philadelphia in what became the Constitutional Convention; the Articles of Confederation was abolished and a new plan of government was created to replace it: The United States Constitution.
Notes Questions:

1.  What were the Articles of Confederation?

2.  Create a T-Chart showing the strengths and weaknesses of the Articles of Confederation.

3.  What was the Northwest Ordinance and what did it establish?

5.  What did the Shay's Rebellion prove to the leaders of the new country?

Summary:
Why were the Articles of Confederation Abandoned?  (Use the details from your notes as evidence.)
Powered by