Essential Question: How did the Industrial Revolution impact the economic development and the lives of people in the United States?
​ 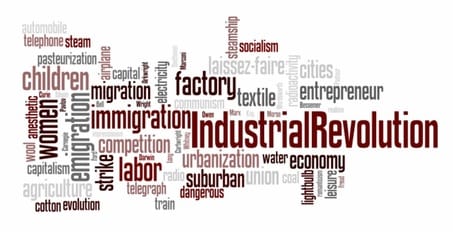 The Industrial Revolution changed how goods were made in the United States and affected how people lived and worked. Previously, people made a living by supplying their own needs.  With the new inventions, especially steam-power, the factory system (assembly line) began.  Instead of spinning and weaving in their homes (cottage industries) people went to work in factories for wages.  Factories boomed in the north as the demand for the products grew.  The revolution started in Great Britain and was fueled in the United States by new inventions that drastically changed how goods were made. Samuel Slater is credited with stealing the plans to create the first factory in the United States.  The factory system not only allowed for an increase of production at a cheaper cost but also turned the nation into more of a consumer economy.  New agricultural inventions produced an abundance of crops and increased the demand for more land. 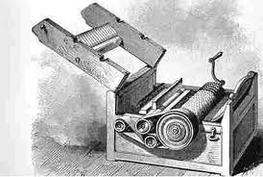 Click the image above to watch the Cotton Gin in action!
Cotton Gin:
Eli Whitney invented the cotton gin in 1793.  The cotton gin revolutionized the cotton production in the South by automating the seed separation process. Before the gin, the seeds were removed by hand and it took many hours to clean the cotton.  With the use of the cotton gin, fifty pounds of cotton could be cleaned daily. Cotton became king in the South, which led to it becoming the leading export to New England and England.  The huge profits from cotton greatly increased the demand for more land and slaves.  People moved into the southeastern parts of the United States (Mississippi, Alabama, and Louisiana) to grow cotton.  More and more slaves were needed to farm the vast cotton producing lands.  ​ 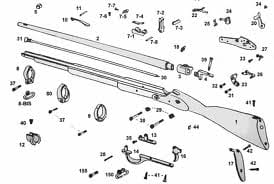 Interchangeable parts:
In the early 1800s, Eli Whitney came up with an idea that transformed the way goods were produced.  Parts to machines and guns were still being made by hand.  If a part broke on a machine or a gun, the part had to be hand-made.  This took forever and was costly.  Whitney wanted to create a way to build machines to make parts that were exactly alike, so that when a part broke it could be easily replaced. He developed interchangeable parts as a way to solve parts for everything.  Before long, goods were being produced faster and cheaper than they ever had been before.  Eli Whitney did not know it, but he also introduced the idea of mass production, the manufacture of goods in large amounts.  ​ 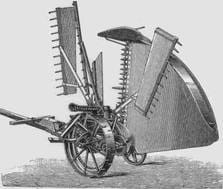 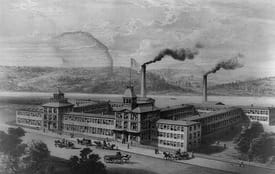 The Factory System:
The first profitable factory system (mass production of goods) was developed in the United States in 1793.  Samuel Slater set up a cotton-spinning factory in Rhode Island.  In 1813 Francis Lowell founded the Lowell Mills in Waltham, Massachusetts.  The Lowell Mills were famous for spinning cotton into cloth.  The Lowell Mills were the first to employ women as workers.  Young girls from the surrounding farms would take jobs in the mill for one to two years.  After that they returned to the farm, married or moved west.  At first, the Lowell System involved recruiting young women from nearby farms and housing them in boarding houses.  The girls were supervised in the boarding houses and paid a decent wage.   When the price for textiles (cloth) dropped in the 1840s, the girls experienced a drop in wages and longer hours and more production at work.  Eventually, the girls organized a labor reform movement. ​ 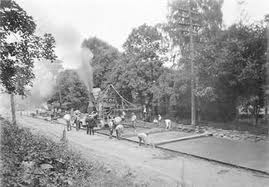 Turnpikes and Roads:
A barrier to the Industrial Revolution was the transportation system in the late 1700s and early 1800s.  Most roads were dirt paths filled with potholes.  The cost of overland transportation of goods was too expensive.  It cost more to ship 300 miles over land than to ship from the United States to Europe.  In 1791 a new era of transportation began.  A turnpike between Lancaster and Philadelphia, Pennsylvania was built.  When Ohio joined the Union, the Congress gave money for the National Road to be built. The National Road eventually reached from Baltimore Maryland to Vandalia, Illinois. ​ 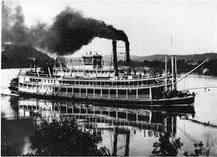 Steamboat:
Because land transportation still remained more expensive to ship goods than water transportation, many farmers continued to ship goods by flatboats or rafts.  Water transportation was slow and the vessels had difficulty moving upstream.   In 1807, Robert Fulton designed and developed the first steam-powered commercial ship.  The steamboat, Clermont, went upstream from New York City to Albany on the Hudson River in only thirty-two hours. 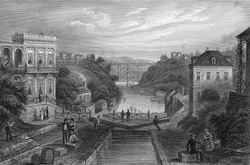 Erie Canal:
The building of the Erie Canal in 1825 further revolutionized water transportation.  The Erie Canal was the first artificial waterway to connect the Great Lakes to the Atlantic Ocean.  The canal had 84 locks to raise or lower barges 10 feet at a time.   Before the canal was built it took $100 and 20 days to transport a ton of goods from Albany to Buffalo New York.  The cost fell to $5 a ton and six days.  By 1840, 3,326 miles of canals had been dug in the United States, which sparked an economic revolution. 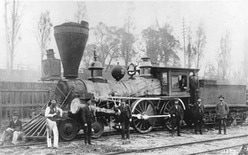 Steam locomotive:
James Watt’s steam engine offered a dramatic increase in fuel efficiency for everything from pumping water to transporting goods on locomotives.  Because steamboats, canals, or roads could not reach some cities, the steam locomotive became the chief means of transportation in 1830.  With a speed of 10 miles an hour, the steam-powered trains were faster than canals, steamboats and could travel in any season.  A draw back to the steam-powered trains was the explosions and fires.  Many travelers were fearful of train wrecks and cities and farmers were concerned with the sparks that started fires along the tracks.

The transportation revolution stimulated agriculture and industry to produce goods and reduced the costs of shipping goods to the markets.  Another important outcome is that the transportation revolution strengthened the ties between the east and west.  Once separated by physical barriers and distance, the two regions now were able to trade and travel with one another. 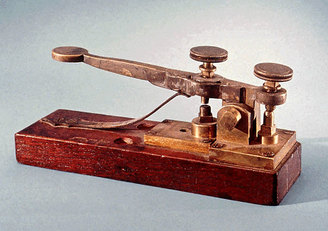 Telegraph:
In 1840, Samuel Morse patented his “talking wire” or telegraph. The telegraph was a device that sent electrical signals along a wire.  The signals were based on a code of dots, dashes, and spaces and were called Morse code.  Morse’s invention was an instant success.  Businesses especially gained from being able to send messages over long distances in minutes.  Using the telegraph, factory owners, merchants, and farmers could access information about supply, demand and prices of goods in different areas. ​
​Essential Question: How did the Industrial Revolution impact the economic development and the lives of people in the United States?

Note Questions:
1. Describe a free-enterprise economic system in your own words.

2. How did the Industrial Revolution change the way goods were produced?

3. How did the Industrial Revolution change the way people lived and worked?

4. What important inventions were created during the Industrial Revolution?  How did each effect the country?

5. What improvements in transportation occurred during the Industrial Revolution?  How did these improvements        effect the country?

6. What improvements in communication occurred during the Industrial Revolution?  How did these improvements      effect the country?

Summary:
How did the Industrial Revolution impact the economic development and the lives of people in the United States?

Horrors of the Industrial Revolution
​

Letters from a Lowell Mill Girl

The Lorax and the Industrial Revolution

Essential Question: How did the Industrial Revolution negatively impact the lives of people in the United States?
Powered by