Causes of the War
France and Britain, Europe's two most powerful nations, had battles almost constantly since 1793, and their warfare directly affected American trade. American presidents from Washington to Madison tried to keep the United States neutral during these conflicts, but both France and Britain deliberately ignored the rights of neutral countries.

For the Americans, the greatest annoyance was Britain's practice of impressments, or the capture of American sailors for service in the British navy. The British government claimed that it only detained subjects of the Crown who sailed under the American flag to escape wartime service in their own navy. In fact, the British seized not only their own deserters, but also frightened a significant number of United States citizens-estimates suggest 6000 or more.
The War Begins
Britain did not really want a war with the United States because it was already involved in another war with France. To try to avoid war, the British announced that they would no longer interfere with American shipping. But the slow mails of the day prevented this news from reaching the United States until weeks after June 18th, when Congress approved Madison’s request for a declaration of war.

The War of 1812 had two main phases. From 1812 to 1814, Britain concentrated on its war against France. It devoted little energy to the conflict in North America, although it did send ships to blockade the American coast. The second phase of the war began after the British defeated France in April 1814. With their European war nearly at an end, the British could turn their complete attention to the United States. The United States military was weak when the war was declared. Democratic-Republicans had reduced the size of the armed forces. When the war began, the Navy had only about 16 ships. The army had fewer than 7,000 men. These men were poorly trained and equipped, and were often led by inexperienced officers. 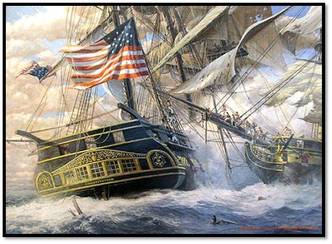 The U.S. Naval Battle Ship Constitution in one of its victories.
The First Phase of the War
In spite of its small size, the United States Navy rose to the challenge. Its warships were the fastest afloat. American naval officers had gained valuable experience fighting pirates in the Mediterranean Sea. Early in the war, before the British blockaded the coast, ships such as the Constitution and the United States won stirring victories. These victories on the high seas boosted American confidence.

General Andrew Jackson in the Battle of New Orleans
The Second Phase of the War
After defeating Napoleon in April 1814, Britain turned its full attention to the United States. British forces focused their attack on Washington D.C. and burned the Capitol building and the president’s mansion in August. The British then attacked Fort McHenry at Baltimore. The commander of Fort McHenry had earlier requested a flag “so large that the British will have no difficulty in seeing it.” Detained on a British ship, a Washington lawyer named Francis Scott Key watched the all-night battle. At dawn, Key discovered that the flag was still flying. He expressed his pride in what became the U.S. national anthem. Meanwhile, in the south, the British moved against the strategic port of New Orleans. In December 1814, dozens of ships carrying 7,500 British troops approached Louisiana. To fight them, the Americans patched together an army under the command of General Andrew Jackson.

The British attacked Jackson’s forces on January 8, 1815. Protected by earthworks, American riflemen mowed down the advancing redcoats. It was a great victory for Jackson. American casualties totaled 71, compared to Britain’s 2,000. Though the Battle of New Orleans made Jackson a hero, it was unnecessary. Slow mails from Europe had delayed news of the Treaty of Ghent, which ended the War of 1812. It had been signed two weeks earlier, on December 24, 1814. 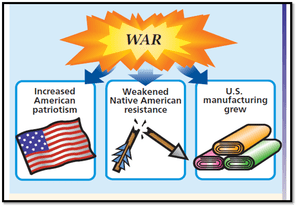 The Legacy of the War
The treaty showed that the war had no clear winner. No territory changed hands, and trade disputes were left unresolved. Still, the war had important consequences. First, the heroic exploits of men such as Andrew Jackson and Oliver Perry increased American patriotism. Second, the war broke the strength of Native Americans, who had sided with the British. Finally, when war interrupted trade, the Americans were forced to make many of the goods they had previously imported. This encouraged the growth of U.S. manufactures. The United States had also proved that it could defend itself against the mightiest military power of the era. For perhaps the first time, Americans believed that the young nation would survive and prosper.

Another legacy of the war was Francis Scott Key’s “The Star Spangled Banner.”  Key wrote this poem while imprisoned in Baltimore on a British ship.  It late became our national anthem. 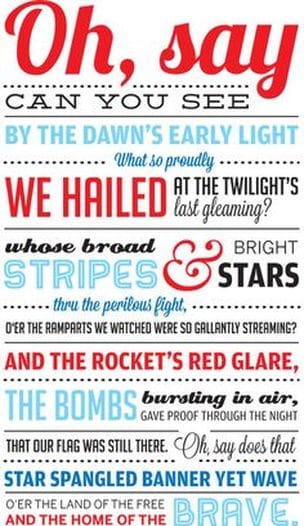