Rise of the Political Parties

Use the presentation below to complete the chart on the Federalists and Democratic Activities.

When Washington left office in 1797, relations between France and the United States were tense. With Britain and France still at war, the French began seizing U.S. ships to prevent them from trading with the British. Within the year, the French had looted more than 300 U.S. ships.

Although some Federalists called for war with France, Adams hoped talks would restore calm .To this end, he sent diplomats Charles Pinckney, Elbridge Gerry, and John Marshall to Paris. Arriving there, they requested a meeting with the French minister of foreign affairs. For weeks, they were ignored.

Then three French agents—later referred to as X, Y, and Z— took the Americans aside to tell them the minister would hold talks. However, the talks would occur only if the Americans agreed to loan France $10 million and to pay the minister a bribe of $250,000. The Americans refused. “No, no, not a sixpence,” Pinckney shot back. Adams received a full report of what became known as the XYZ Affair.

After Congress and an outraged public learned of it, the press turned Pinckney’s words into a popular slogan: “Millions for defense, not one cent for tribute!” In 1798, Congress canceled its treaties with France and allowed U.S. ships to seize French vessels. Congress also set aside money to expand the navy and the army.  This is the reason John Adams is known as the father of the navy. 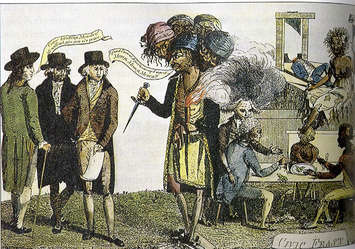 American newspapers fueled public anger over the XYZ Affair by publishing editorial sand cartoons like this one.

Here the five-man group ruling France demands money at dagger point from the three Americans. The American diplomats respond, “Cease bawling, monster! We will not give you sixpence!”
​

The Alien Act increased the waiting period for becoming a U.S. citizen from 5 to 14 years and gave the president the power to arrest disloyal aliens or order them out of the country during wartime. The Sedition Act act outlawed sedition, saying or writing anything false or harmful about the government. With these acts, the Federalists clamped down on freedom of speech and the press.  About 25 Democratic-Republican newspaper editors charged under this act, and 10 were convicted of expressing opinions damaging to the government. 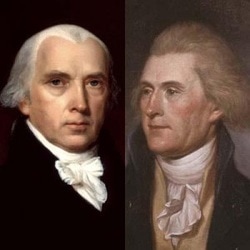 The Democratic-Republicans, led by Jefferson and Madison, searched for a way to fight the Alien and Sedition Acts. They found it in a theory called states’ rights. According to this theory, states had rights that the federal government could not violate. Jefferson and Madison wrote resolutions (or statements) passed by the Kentucky and Virginia legislatures in 1798 and 1799. In the Kentucky Resolutions, Jefferson proposed nullification, the idea that a state could nullify the federal law within the state. In the Virginia Resolutions, Madison said a state could interpose, or place, itself between the federal government and its citizens. The two sets of resolutions followed a similar argument: The states had the duty to nullify within their borders those laws that were unconstitutional.
These resolutions declared that the Alien and Sedition Acts violated the Constitution and needed to be nullified. No other states supported Kentucky and Virginia.  However, within two years the Democratic-Republicans won control of Congress, and they either repealed the Alien and Sedition Acts or let them expire between 1800 and 1802.

Note Questions:
XYZ Affair
1.  What problem was the United States having with France during John Adams’ presidency?  What is this called?
2.  What happened when President Adams sent diplomats to France?
3.  What famous slogan was made as a result of the XYZ Affair?

The Kentucky/Virginia Resolutions
1.  What did Virginia and Kentucky declare about the Alien and Sedition Acts?
Powered by