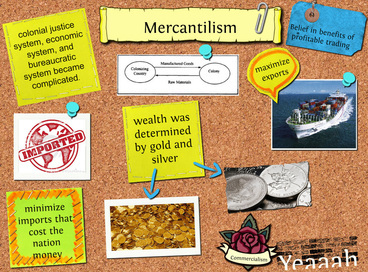 ​Mercantilism
Mercantilism became popular in Europe in the 1500s and was the primary reason behind Europe’s desire to colonize new lands.

The theory of mercantilism states that there is a certain amount of wealth and riches in the world and that it is in a nation’s best interest to accumulate it.  Through wealth, a nation can achieve power.  A country achieves wealth by producing and exporting more goods than it imports.  These manufactured goods must be sold at a profit for wealth to accumulate.

Profits are large when a country spends a small amount of money on raw materials needed to create a product and sells the manufactured goods for a high price. It is easy to see how a new colony in North America would be the perfect place for Europeans to find a steady supply of new raw materials.

Mercantilism was meant to serve the interests of the empire, not the colony. Colonies existed for the benefit of the mother country. Colonies could not sell their raw materials to anyone but the mother country, and they were not allowed to manufacture anything for export.

Key Words:
Profit: an excess of money after spending
Raw Materials: natural sources, such as trees orfurry animals
Manufactured Goods: a product that has been manufactured

Rules of Mercantilism:
Between 1651 and 1673, the English Parliament passed four Navigation Acts meant to ensure the proper mercantilist trade balance. The acts declared the following:
Click on this link to play with the Triangular Trade interactive map. 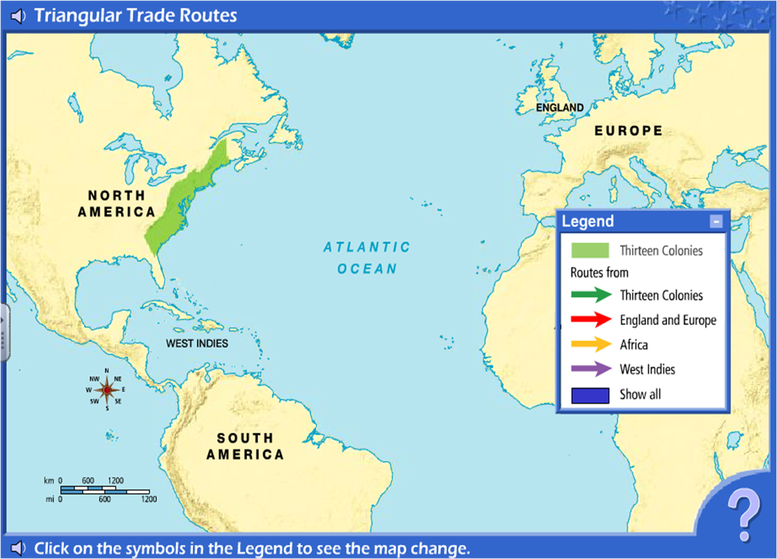 The economic system of free enterprise operates according to five main principles: the freedom to choose our businesses, the right to private property, the profit motive, competition, and consumer sovereignty.


Rules of the Free Enterprise System:

Freedom to Choose Our Businesses
We can have any job of open any business that we want.

Right to Private Property
Private property is a piece of land, a home, or a car owned by an individual, a family, or a group.

Profit Motive
The main reason why you or any enterprising person organizes a business is to make money. You do this by earning more money than you spend. The amount of money left over after subtracting your business expenses from your business income is known as your profit.

Competition
You are free to start a computer business, and so is everyone else. The rivalry between sellers in the same business for consumers' dollars is called competition. To win a share of the computer business, other sellers may try to offer more and better services, or services at lower prices.

Consumer Sovereignty
It is the customers, or consumers, who determine whether any business succeeds or fails by buying or not buyinh from that business. Also, supply and demand determines the prices in the market place.
Powered by