Essential Question:  What political compromises were established for the growing nation and how did they attempt to ease the conflict over slavery in the new states? 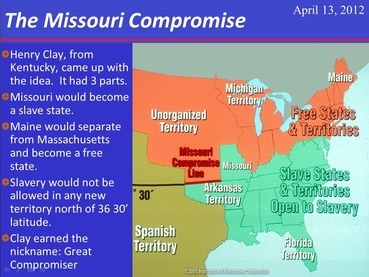 Click the picture to see details.
The Missouri Compromise (The Compromise of 1820)
The Missouri Compromise was established when the people of Missouri wanted to be admitted into the United States as a slave state. This would throw off the balance of slave and free states. After much debate a compromised was reached in 1820 thanks to Henry Clay, who earned the nickname "The Great Compromiser". 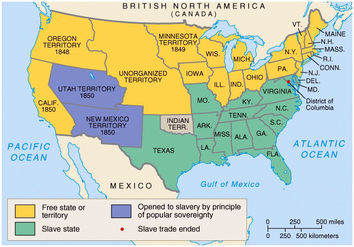 The Compromise of 1850
Due to the Mexican Cession and the effects of the Gold Rush of 1849, California was ready to be admitted to the Union as the 16th free state. This would again threaten the balance of power between the free and slave states in the country.  Once again Henry Clay came up with a compromise in Congress.
In exchange for letting California enter as a free state, the South was guaranteed that no federal restrictions on slavery would be placed on Utah or New Mexico. 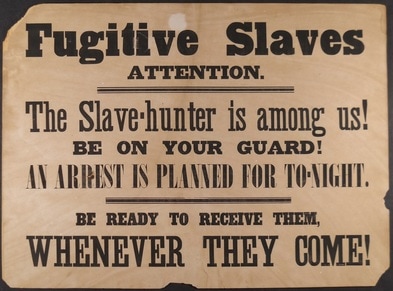 Additionally, Congress passed a more strict Fugitive Slave Law, letting Southern slave owners hunt down slaves who escaped to the North.  The new Fugitive Slave Law was disliked publicly in the North and was even criticized in Harriet Beecher Stowe's Uncle Tom's Cabin.

The new law created a force of federal commissioners empowered to pursue fugitive slaves in any state and return them to their owners. No statute of limitations applied, so that even those slaves who had been free for many years could be (and were) returned. 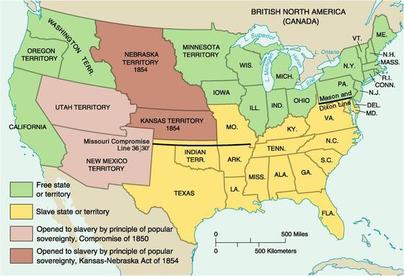 The Kansas-Nebraska Act
The period of compromise started to unravel in 1854.  Senator Stephen Douglas of Illinois proposed a doctrine of "popular sovereignty" on the issue of slavery in new states.  His idea said that the people of the territory would decide for themselves whether that area should have slavery.
The Kansas-Nebraska Act was passed by the U.S. Congress on May 30, 1854. It allowed people in the territories of Kansas and Nebraska to decide for themselves whether or not to allow slavery within their borders. The Act served to repeal the Missouri Compromise of 1820 which prohibited slavery north of latitude 36°30´. 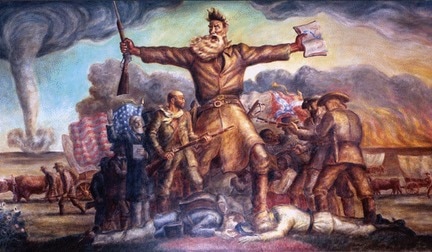 John Brown & Bleeding Kansas
The Kansas-Nebraska Act infuriated many in the North who considered the Missouri Compromise to be a long-standing binding agreement. In the pro-slavery South it was strongly supported. This led to violence in the Kansas territory led by John Brown, a radical abolitionist.  This fighting over the issue of slavery was nicknamed "Bleeding Kansas" and would foreshadow the bloodshed of the Civil War.

John Brown's Rap (it's going down)

Essential Question:  What political compromises were established for the growing nation and how did they attempt to ease the conflict over slavery in the new states?

Note Questions:
1.  What were the terms of the Missouri Compromise?

4.  What was Senator Henry Clay's role in these compromises?

6.  What is the significance of John Brown and "Bleeding Kansas"?

7.  How does this period of compromise show that Civil War was inevitable? '

Summary:
What political compromises were established for the growing nation and how did they attempt to ease the conflict over slavery in the new states?
Powered by