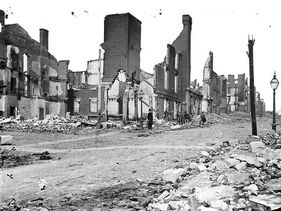 Reconstruction generally refers to the period in United States history immediately following the Civil War in which the federal government set the conditions that would allow the rebellious Southern states back into the Union.

The process of reconstructing the Union began in 1863, two years before the Confederacy formally surrendered. After major Union victories at Gettysburg and Vicksburg, Abraham Lincoln issued a proclamation in which he outlined his Ten-Percent Plan. The plan stipulated that each secessionist state had to redraft its constitution and could reenter the Union only after 10 percent of its eligible voters pledged an oath of allegiance to the United States. In anoth
er past of the plans for reconstruction, Congress successfully create the Freedmen’s Bureau, which helped distribute food, supplies, land and helped educate the new population of freed slaves.

A group of Congress member known as the Radical Republicans believed that Lincoln’s plan was too lenient: they wanted to punish the South for secession from the Union, transform southern society, and safeguard the rights of former slaves. They wanted a plan stating that states could be readmitted to the Union only after 50 percent of voters took an oath of allegiance to the Union. The debate between Lincoln and Congress over the plans for reconstruction never occurred. 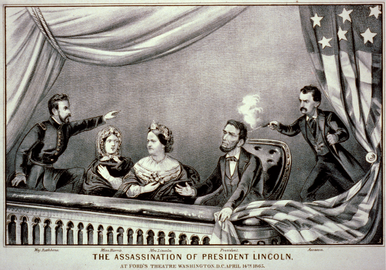 Presidential Reconstruction under Johnson readmitted the southern states using Lincoln’s plan and granted all southerners full pardons, including thousands of wealthy planters and former Confederate officials whom he made write letters asking for forgiveness. 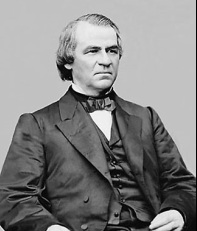 Many southerners reacted violently to the acts that guarded freedmen's civil rights and the three amendments. White supremacists in Tennessee formed the Ku Klux Klan, a secret organization meant to terrorize southern blacks and “keep them in their place.” Race riots and mass murders of former slaves occurred in Memphis and New Orleans that same year. 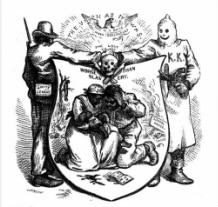 Even with these civil rights acts and amendments passed by Congress, southern whites did everything in their power to limit the rights of their former slaves. During Presidential Reconstruction, white supremacist Congressmen passed a series of laws called the black codes, which denied blacks the right to make contracts, testify against whites, marry white women, be unemployed, and even loiter in public places. Violence by the Ku Klux Klan became so common that Congress had to pass the Ku Klux Klan Act in 1871 to authorize military protection for blacks. 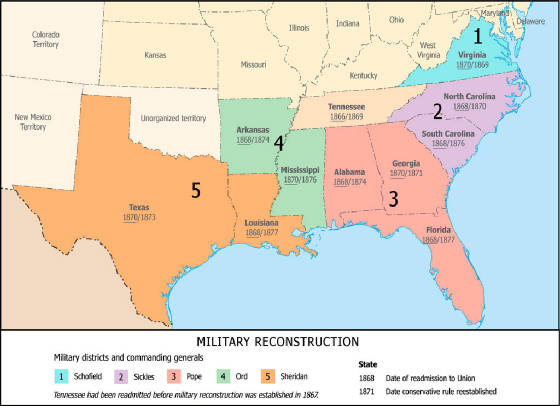 Radical Reconstruction
The Congress that convened in 1867, which was far more radical than the previous one, wasted no time executing its own plan for the Radical Reconstruction of the South. The First Reconstruction Act in 1867 divided the South into five conquered districts, each of which would be governed by the U.S. military until a new government was established. Republicans also specified that states would have to let former slaves vote before being allowed back into the Union. To enforce this order, Congress passed the Second Reconstruction Act, putting the military in charge of southern voter registration. 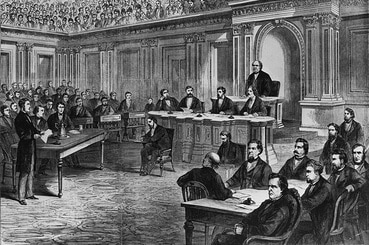 Johnson’s Impeachment
In an effort to limit Johnson’s executive powers, Congress passed the Tenure of Office Act in 1867, which required the president to consult with the House and Senate before removing any congressionally appointed cabinet members. Radicals took this measure in an attempt to protect Secretary of War, a carryover from Lincoln’s cabinet and a crucial figure in military Reconstruction. When Johnson ignored the Tenure of Office Act and fired Stanton, Republicans in the House impeached him by a vote of 126–47. After a tense trial, Congress fell one vote short of removing Johnson from office. 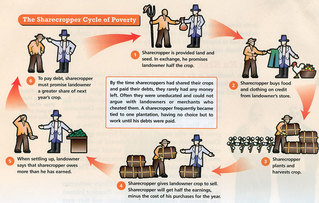 Click the picture to see a larger version.
Carpetbaggers, Scalawags, and Sharecroppers

Countless carpetbaggers (northerners who moved to the South after the war) and scalawags (white Unionists and Republicans in the South) flocked to the South during Reconstruction and exerted significant influence there. Although in many respects they achieved their goals of modernizing and Republicanizing the South, they eventually were driven out by Democratic state politicians in the mid-1870s.

Most former slaves in the South, meanwhile, became sharecroppers
during the Reconstruction period, leasing plots of land from their former masters in exchange for a percentage of the crop yield. By 1880, more than 80 percent of southern blacks had become sharecroppers.
Note Questions:
It is time to get ready for high school, so we are doing these notes the way you will next year.

Remember, notes are not a copy of an entire reading.  Make your questions about the MOST IMPORTANTinformation presented in each subsection and answer with concise notes.
Powered by