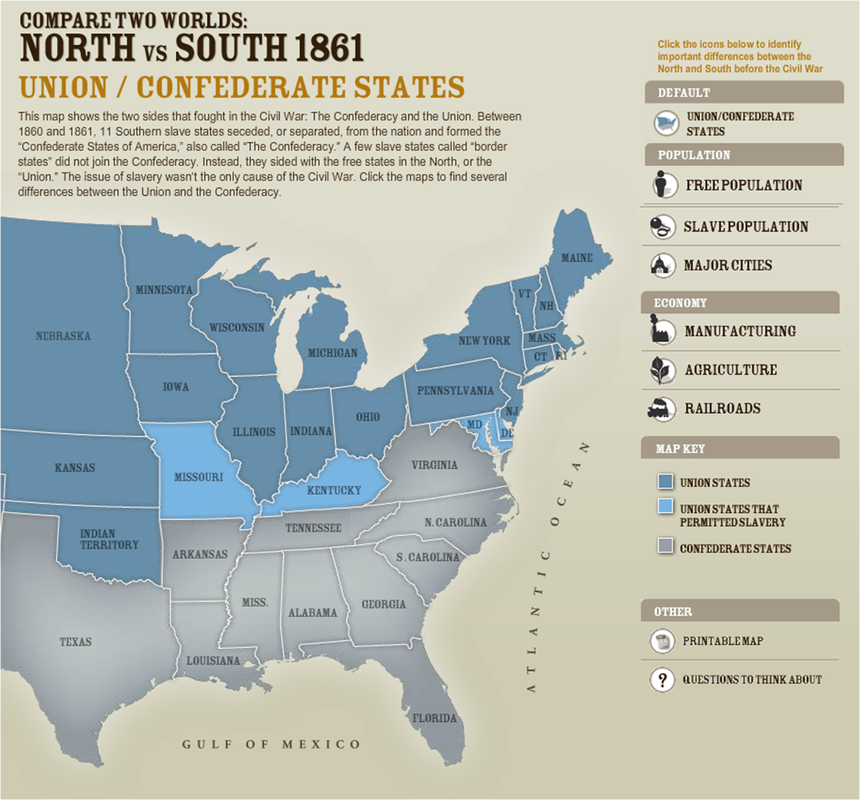 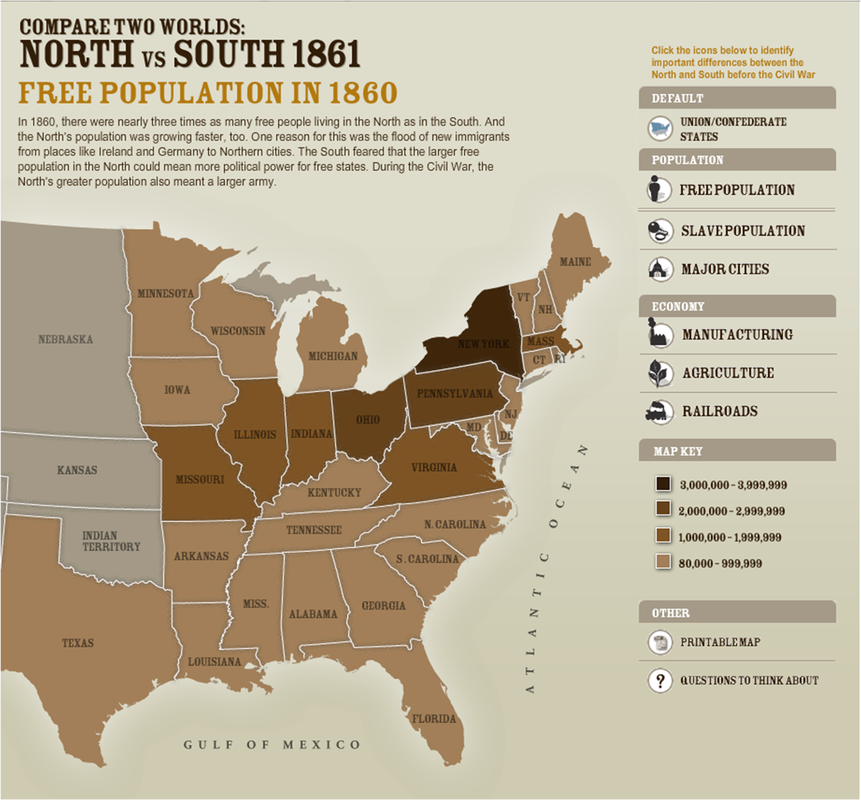 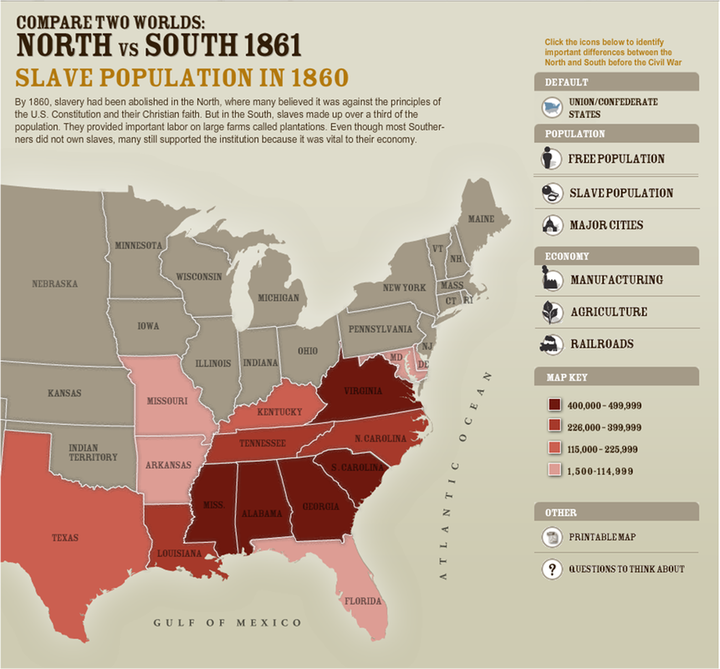 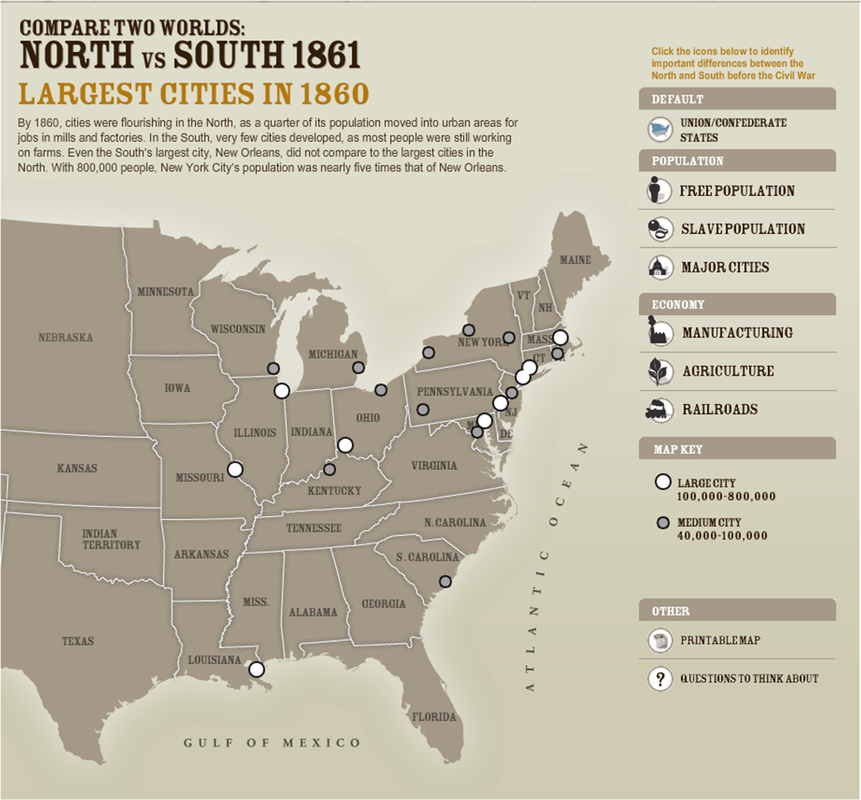 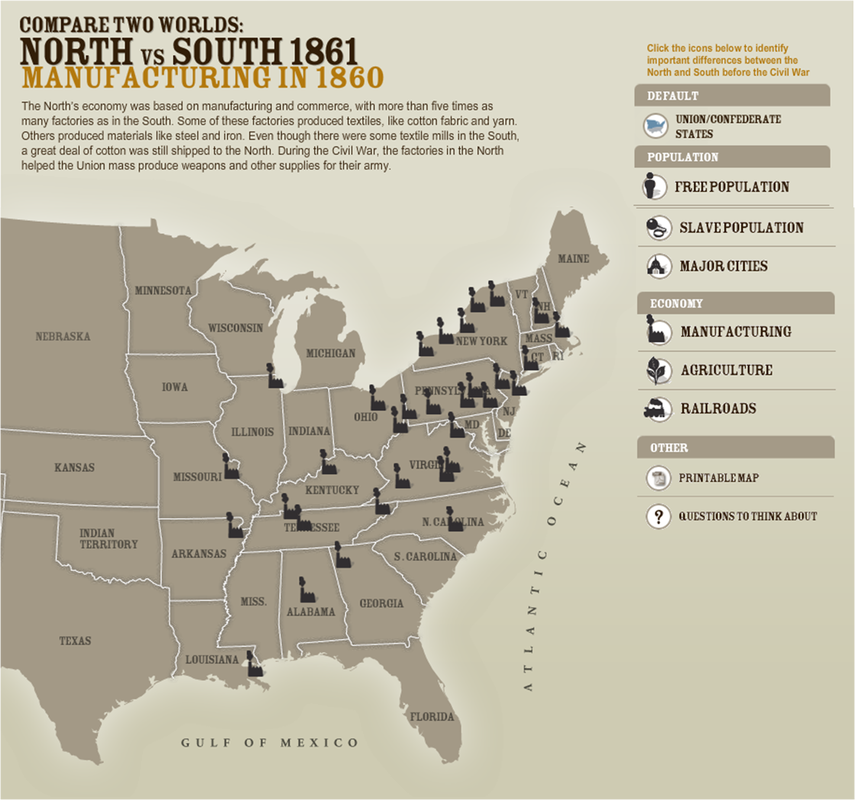 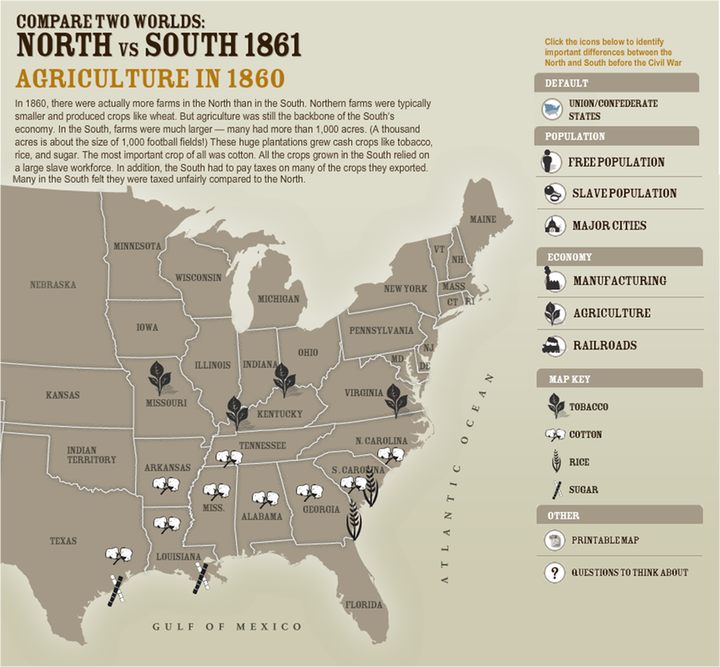 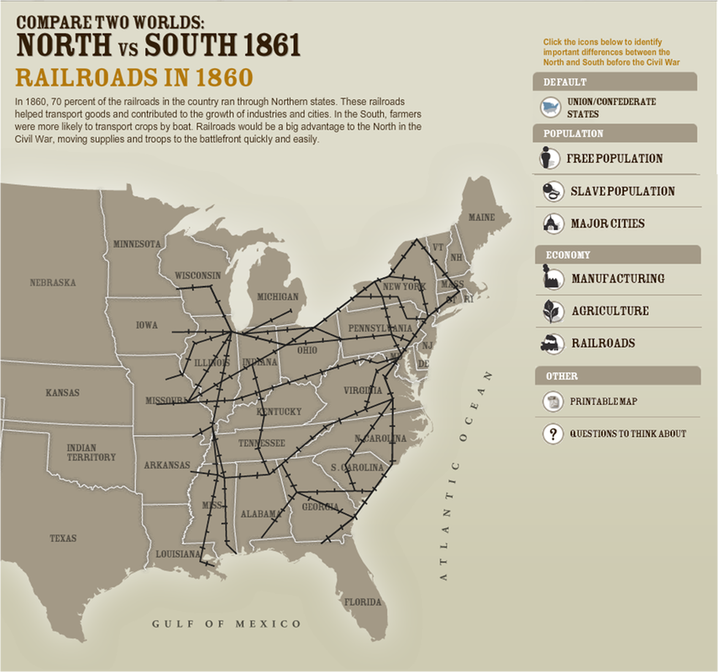 1. The different sections at this time were the North and the South. The West was also a section but this section (because it was new) did not practice sectionalism. Instead it was the other sections that fought to control the destiny of the west.

What was the difference between the two sections?

1. The North - primarily industrial in nature. Business and industry played major roles. While the North was not know for its agricultural production it was the largest producer of grain. Life was faster and commerce important.

2. The South - primarily agricultural. The southern economy was primarily based upon the existence of large family farms known as plantations. The plantation economy relied on cheap labor in the form of slaves to produce tobacco and then cotton. The plantation lifestyle produced a slower more leisurely lifestyle. Farmers on the plantation did not do the work themselves. They were referred to as the "gentleman farmer."

1. Slavery - first and foremost the most important difference between the north and south was slavery. For the most part most northerners really didn't care about slavery in the beginning but as time went on slavery, the existence of it as well as the extension of slavery into the wetern territories, became the central issue.

2. Representation - The north and south each wanted power to pass laws that would benefit theri section. This meant that the more states that became "free" or "slave" meant more votes, both in the House, Senate and Electoral College, for that section. The issue of repreenation is played out as we expand westward and decisions must be made about each state.

3. Tariffs - The South resented all tariffs as they relied on British imports for more of their everyday goods. They also needed other nations to purchase cotton form their farms. As the north supported tariffs to protect their growing industries the south became incressingly angered. Thsi tension eventually led to the passage of what South Carolina called "the Tariff of Abominations." The south then argued they had the right ofnullification. (nullification - the power of a state to declare a federal law null and void.)

4. States Rights - This issue is a direct outgrowth of the South's fear that the North would pass laws that would hurt it's lifestyle. Some examples would be tariffs and laws to restrict or abolish slavery. The south again claimed they had the right of nullification.

Henry Clay once wrote: "I know of no South, no North, no East, no West to which I owe my allegiance. The Union is my country." Henry Clay was quite alarmed by the division faced by America. He worked hard to keep the Union together but as we shall see, he failed.
Notes:
​
Create a chart showing the differences between the north and south during the Civil War Era 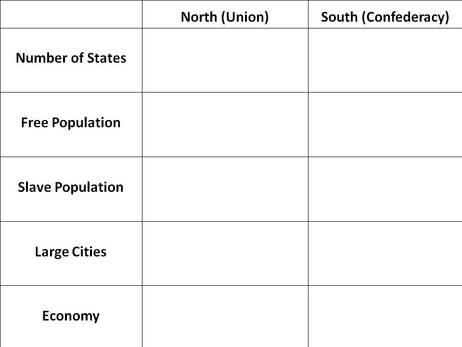 Note Questions:
​
1.  What were some of the most significant differences between the North and South?

2.  What were some of the reasons that slavery was such and important issue to the North and South?

3.  Besides slavery, what were some of the other causes of conflict?

4.  What were some of the advantages the North had over the South in the Civil War?

Summary:
What were the major differences between the North and the South during the Civil War Era?
Powered by