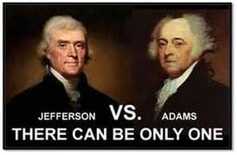 The two parties contesting the election of 1800 were the Federalists, led by President John Adams, and the Democratic-Republicans, represented by Thomas Jefferson.  Each party believed that the other was endangering the Constitution and the American republic. The Democratic-Republicans thought they were saving the nation from monarchy and oppression. They argued, again and again, that the Alien and Sedition Acts supported by the Federalists violated the Bill of Rights.

The Federalists thought that the nation was about to be ruined by radicals—people who take extreme political positions. They remembered the violence of the French Revolution, in which radicals executed thousands in the name of liberty. When Election Day came, the Democratic-Republicans won the presidency.

Jefferson received 73 votes in the Electoral College, and Adams earned 65. But there was a problem. Aaron Burr, whom the Democratic-Republicans wanted as vice president, also received 73 votes.

​According to the Constitution, the House of Representatives had to choose between Burr and Jefferson. The Democratic-Republicans clearly intended for Jefferson to be president. However, the Federalists still held a majority in the House, and their votes would decide the winner. The Federalists were divided. Some feared Jefferson so much that they decided to back Burr. Others, such as Alexander Hamilton, considered Burr an unreliable man and urged the election of Jefferson.  Hamilton did not like Jefferson, but he believed that Jefferson would do more for the good of the nation than Burr.

“If there be a man in the world I ought to hate,” he said, “it is Jefferson. . . . But the public good must be [more important than] every private consideration.”
Alexander Hamilton

Over a period of seven days, the House voted 35 times without determining a winner. Finally, two weeks before the inauguration, Alexander Hamilton’s friend James A. Bayard persuaded several Federalists not to vote for Burr. On the thirty-sixth ballot, Jefferson was elected president. Aaron Burr, who became vice president, would never forget Hamilton’s insults. People of the United States were overjoyed by Jefferson’s election. 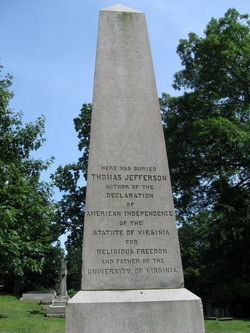 The new president had strong opinions about what kind of country the United States ought to be. But his first order of business was to calm the nation’s political quarrels.

“Let us, then, fellow-citizens, unite with one heart and one mind. . . . Every difference of opinion is
not a difference of principle. . . . We are all Republicans, we are all Federalists.”
Thomas Jefferson, First Inaugural Address

One way Jefferson tried to unite Americans was by promoting a common way of life. He wanted the United States to remain a nation of small independent farmers. Such a nation, he believed, would uphold the strong morals and democratic values that he associated with country living. He hoped that the enormous amount of available land would prevent Americans from crowding into cities, as people had in Europe. As president, Jefferson behaved more like a gentleman farmer than a privileged politician. Instead of riding in a fancy carriage to his inauguration, Jefferson walked the two blocks from his boarding house to the Capitol.

To the end, Jefferson refused to elevate himself because of his office. For his tombstone, he chose this simple epitaph: “Here was buried Thomas Jefferson, author of the Declaration of American Independence, of the statute of Virginia for religious freedom, and father of the University of Virginia.” Jefferson chose not to list his presidency. His belief in a modest role for the central government is reflected in the changes he made during his presidency.
​
Undoing Federalist Programs

Jefferson believed that the federal government should have less power than it had under the Federalists. During his term of office, he sought to end many Federalist programs. At the president’s urging, Congress—now controlled by Democratic- Republicans—allowed the Alien and Sedition Acts to end. Congress also ended many taxes, including the unpopular whiskey tax. Because the loss of tax revenue lowered the government’s income, Jefferson reduced the number of federal employees to cut costs. He also reduced the size of the military. 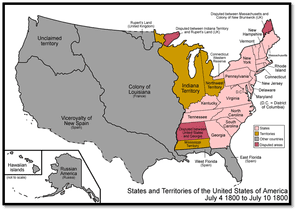 Click the map above for a better image.
The West in 1800

In 1800, when Americans talked about the  “West,” they meant the area between the Appalachian Mountains and the Mississippi River. Thousands of settlers were moving westward across the Appalachians to settle in this region. Many moved onto land long inhabited by Native Americans. Even so, several U.S. territories soon declared statehood. Kentucky and Tennessee had become states by 1800, and Ohio entered the union in 1803.

The Pacific coast region and the Oregon Country also attracted increasing attention. In California, Spain had a chain of 21 missions stretching from San Diego to San Francisco. Starting just north of San Francisco, Russian settlements dotted the Pacific coast all the way to Alaska. Great Britain also claimed land in the region.

As the number of Westerners grew, so did their political influence. A vital issue for many settlers was the use of the Mississippi River. Farmers and merchants used the river to move their products to the port of New Orleans and from there to east coast markets. 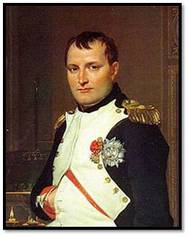 After losing the French and Indian War, France turned over the Louisiana Territory—including New Orleans—to Spain. But in a secret treaty in 1800, Spain returned Louisiana and the port to France’s powerful leader, Napoleon. Now Napoleon planned to colonize the American territory. In 1802, these developments nearly resulted in war. Just before turning Louisiana over to France, Spain closed New Orleans to American shipping. Angry Westerners called for war against both Spain and France. To avoid hostilities, Jefferson offered to buy New Orleans from France. He received a surprising offer back. The French asked if the United States wanted to buy all of the Louisiana Territory—a piece of land even larger than the United States at that time. 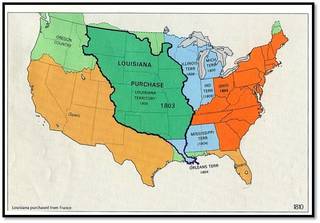 Click the map above for a better image.
The Louisiana Purchase

A number of factors may have led Napoleon to make his surprising offer. He was probably alarmed by America’s fierce determination to keep the port of New Orleans open. Also, his enthusiasm for a colony in America may have been lessened by events in a French colony in the West Indies. There, a revolt had resulted in disastrous losses for the French. Another factor was France’s costly war against Britain. America’s money may have been more valuable to Napoleon than its land.

Jefferson was thrilled by Napoleon’s offer. However, the Constitution said nothing about the president’s right to buy land. This troubled Jefferson, who believed in the strict interpretation of the Constitution. But he also believed in a republic of small farmers, and that required land. So, on April 30, 1803, the Louisiana Purchase was approved for $15 million— about three cents per acre. The purchase doubled the size of the United States. At the time, Americans knew little about the territory. But that would soon change with the Lewis and Clark Expedition. 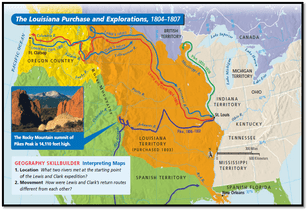 Click the map above for a better image.
Lewis and Clark Explore

Since 1802, Thomas Jefferson had planned an expedition to explore the Louisiana country. Now that the Louisiana Purchase had been made, learning about the territory became even more important.

Jefferson chose a young officer, Captain Meriwether Lewis, to lead the expedition. In Jefferson’s map-lined study, the two men eagerly planned the trip. Lewis turned to his old friend, Lieutenant William Clark, to select and oversee a volunteer force, which they called the Corps of Discovery. Clark was a skilled mapmaker and outdoorsman and proved to be a natural leader. The Corps of Discovery soon became known as the Lewis and Clark expedition.

Lewis and Clark set out in the summer of 1803. By winter, they reached St. Louis. Located on the western bank of the Mississippi River, St. Louis would soon become the gateway to the West. But in 1803, the city was a sleepy town with just 180 houses. Lewis and Clark spent the winter at St. Louis and waited for the ceremony that would mark the transfer of Louisiana to the United States. In March 1804, the American flag flew over St. Louis for the first time.
​

When Thomas Jefferson took office in 1801, he expected to concentrate on domestic concerns. In his inaugural address, Jefferson advised the United States to seek the friendship of all nations, but to enter into “entangling alliances with none.”

However, the president’s desire to keep the United States separated from other nations and their problems was doomed to fail. For one thing, American merchants were busily engaged in trade all

over the world. For another, the Louisiana Purchase and the Lewis and Clark expedition were about to open the country to westward expansion. Expansion would bring Americans into closer contact with people from other nations who had already established settlements in the West. Finally, the United States had little control over the actions of foreign nations. Staying out of the ongoing conflict between France and England would be just as difficult.
​ 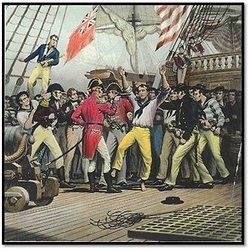 Problems with France and England

For a long time, the United States managed not to get involved in the European wars that followed the French Revolution. At times, the nation even benefited from the conflict. Busy with a war in Europe, France sold the Louisiana Territory to the United States. And American shippers eagerly took over the trade interrupted by the war.

By 1805, however, the British began to clamp down on U.S. shipping. They did not want Americans to provide their enemy (France) with food and supplies, so the British decided to set up a partial blockade. This would only allow some American ships to bring provisions to Europe. This partial blockade angered France, which enacted its own laws to control foreign shipping. These changes put American merchants in a difficult position. If they obeyed the British rules, their ships could be seized by the French. If they obeyed the French rules, their ships could be seized by the British. Britain also interfered with U.S. trade by the impressment, or kidnapping, of American sailors to work on British ships. Between 1803 and 1812, the British impressed about 6,000 American sailors. ​ 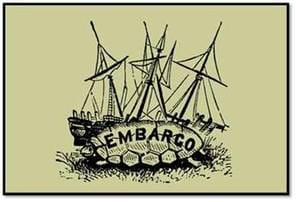 Trade as a Weapon

Instead of declaring war, Jefferson asked Congress to pass legislation that would stop all foreign trade. In December, Congress passed the Embargo Act of 1807. Now American ships were no longer allowed to sail to foreign ports. The act also closed American ports to British ships. Jefferson’s policy was a disaster. It was more harmful to the United States than to the British and French. American farmers and merchants were especially hard hit. Southern and Western farmers, for example, lost important markets for their grain, cotton, and tobacco. The embargo became a major issue for President Jefferson’s second term in office.
Essential Question: What major economic, domestic, and foreign issues did President Jefferson face?